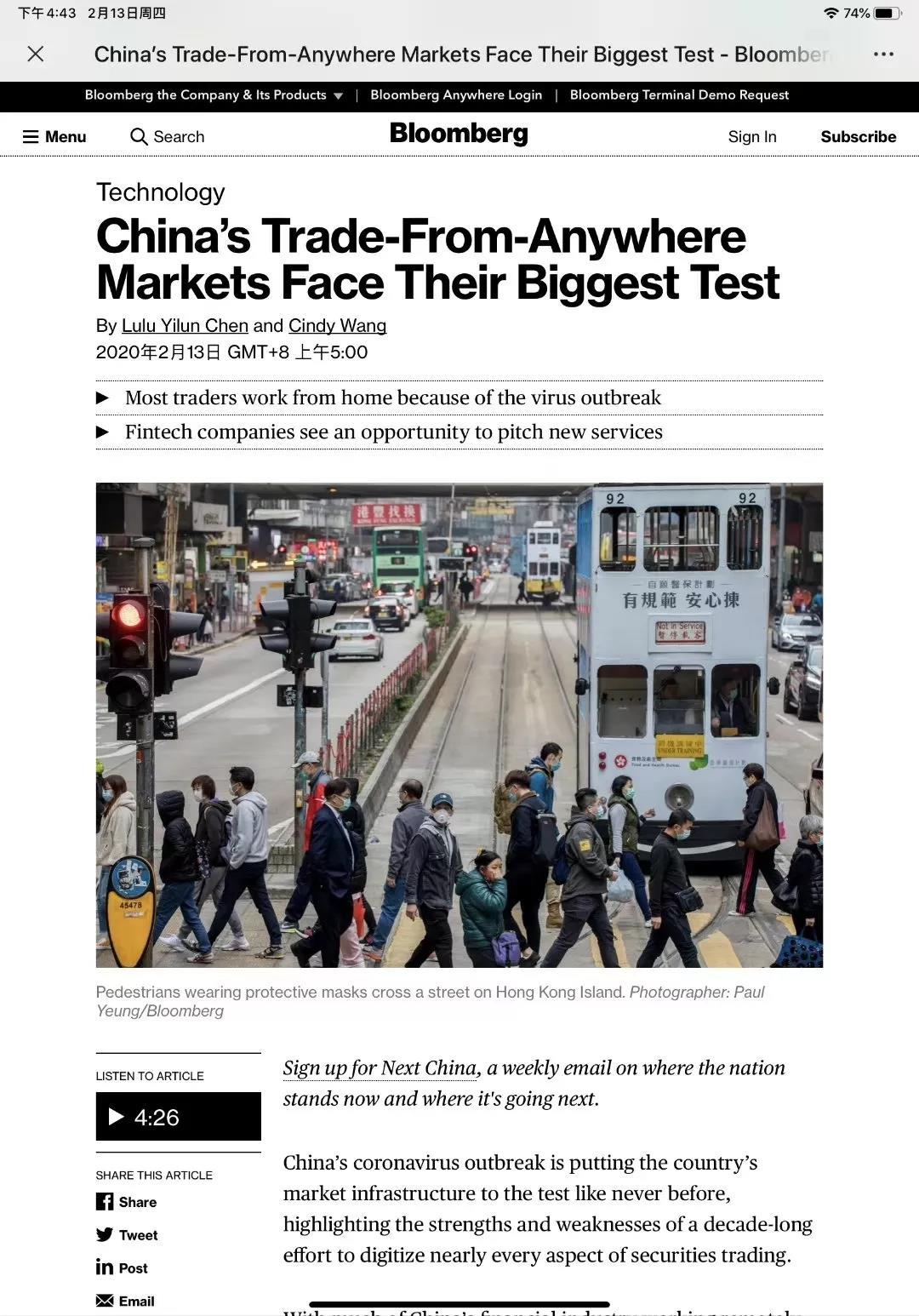 China’s coronavirus outbreak is putting the country’s market infrastructure to the test like never before, highlighting the strengths and weaknesses of a decade-long effort to digitize nearly every aspect of securities trading.

With much of China’s financial industry working remotely over the past two weeks, trading in the nation’s giant equity and debt markets has continued without any major hiccups. At the same time, some firms are discovering limitations to contingency plans and work-from-home arrangements that may lead to a renewed focus on improving their digital capabilities.

Partly spurred by competition from a new breed of startups, China’s biggest financial companies have invested billions in cloud computing and other virtual infrastructure in recent years, enabling a relatively smooth transition to remote work for their employees. The outbreak may encourage laggards to step up their investments, while giving fintech firms a fresh opening to pitch services from mobile client management to digital security.

“China’s finance industry is probably one of the better prepared sectors for dealing with this crisis,” said Zhao Xinge, a Shanghai-based professor of finance at China Europe International Business School. “It grew in tandem with the development of the internet and technology, and the advantages of that effort are showing now.”

Trading activity in China’s $7.4 trillion stock market has soared since it reopened after the weeklong Lunar New Year break, with millions of amateur and professional investors placing bets from smartphones or home PCs. (Transactions in debt and currency markets have been more subdued, at about half the daily average over the past year.)

Remote access to office software via virtual private networks has kept disruptions to a minimum, brokers say, though slower internet speeds have been an issue for some.

He Qi, a fund manager at Huatai Pinebridge Fund Management Co. in Shanghai, said that while the current setup was “very inconvenient,” his department has only had to send a few people into the office to execute trades. Founder Securities Co., a Beijing-based financial services firm, said it’s requiring a small number of staff on rotation in the office while the rest work remotely.

Starting with the advent of online payments and electronic trading around the turn of the century, China has developed modern financial infrastructure that is in many ways on par with, or better than, more developed nations.

The International Monetary Fund has called the country a global leader in the application of technology to financial services, pointing to a combination of market scale, light-touch early regulation and the ability of large fintech firms to build integrated ecosystems.

The Shanghai stock exchange, for example, built an online trading network deploying encryption and identity verification systems as early as 2002. Today, 95% of securities trading is done online or via mobile apps, according to China’s securities watchdog. Most brokerages allow investors to place orders and set up new trading accounts over the internet, using online identity verification services that combine image and voice recognition.

Some fintech companies have seen a jump in demand for their services during the outbreak. Daily activity at Tencent Holdings Ltd.-backed QTrade, which operates a bond-market messaging service used by more than 600 institutions, has spiked by as much as 20% since the virus began forcing investors to work remotely.

“This outbreak presents an opportunity for China’s bond trading to become even more digitized,” said Fiona Liu, a co-founder of QTrade. “It gives companies a reason to further compartmentalize trading procedures, so more people can work without having to be physically present in the office.”

Bond traders use QTrade’s platform to negotiate prices via the QQ messaging app. It verifies identities, logs conversations and transactions for at least five years, and complies with securities regulations. In response to the outbreak, QTrade added a service that enables users to get in touch with traders on duty.

For many in the financial industry, the past few weeks have underscored the need for continued vigilance to ensure their firms can keep operating at full capacity during crises.

“If the situation of working from home persists into next week or longer, the company may need to invest in software” to address backlog issues, said Amy Lin, analyst at Capital Securities in Shanghai. “In any case, digitization of companies will speed up because of this.”